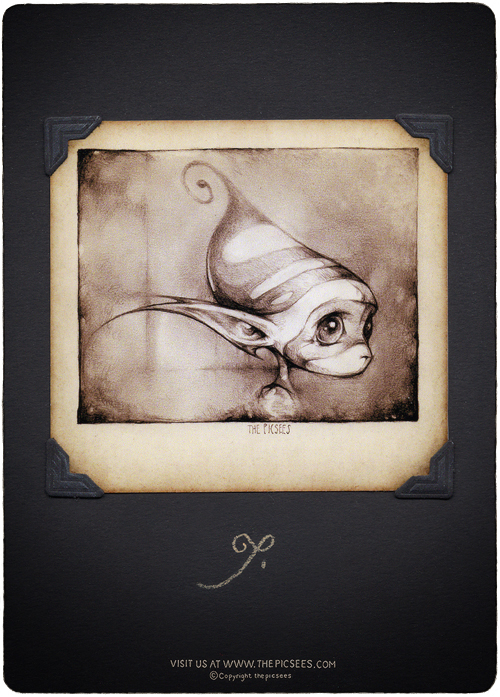 The other day we were following a bug around the house cause we were being detectives and he crawled into a box so we had to pack everything out to try find him...he got away but we did find a photo album with no pictures inside. Mika said we should use it to put pictures of us and all our wee friends into and this picture is the first picture of our brand new Picsee album! Its a picture of one of our most bestest friends Liloo Lumins! She is a sea Picsee. She can swim faster that anyone we know and if she goes in the water her hands and feets turn into fins just like a fish! its the best thing ever! We tried to do that also but after almost an hour in the bath we just had wrinkly fingers...no fins like Liloo.

She lives in Brighton by the sea...it's far from where we live but we still see each others all the time. We saw her just a wee while ago when we were in London for our holiday...she came to visit us there and that's when we made this picture! It's of her standing in front of the London tower. You cant really see the tower cause she's only little and the tower is very very big. If we wanted to fit the tower in the picture she would only be a teeny tiny little dot and that would make no sense cause if there is one thing we want to remember forever about that day it's definitely not a tower...its seeing Liloo! That was the best thing about the whole holiday by far ~:D

We hope you like the picture as much as we do! We will share more pictures and stories form our new album with you very soon ~:D